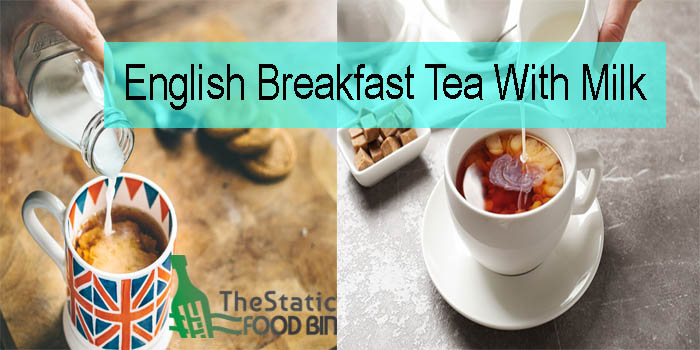 An English breakfast has always been amongst the more discussed topics throughout the entire world as the Englishman makes some of the best combinations to have as breakfast.

A typical English breakfast is also known as a ‘fry-up’.

A full breakfast consists of fried eggs, sausages, bacon, tomatoes, mushrooms, fried bread, and a slice of white pudding, and the most important of all of them would be Tea.

An English breakfast would always be incomplete without tea.

No one could disagree that there is nothing more refreshing and complement to breakfast than a well-made tea, English tea is one of the best tea in the world.

They have tea included in a typical English breakfast for decades and it doesn’t seem to go away any sooner.

Tea has remained the number one drink amongst the British people, averaging around 50 billion cups each year.

Which results in $2.1 billion in revenue in the UK. It only states one thing and which is that British people love having tea.

Most of the consumption occurs while having breakfast. It always compliments a good breakfast.

Tea is such a delight that Britain stands at number one when it comes to drinking tea.

People like it having milk more than having black tea which. Talking of black tea, 70% of the total consumption consists of black tea in the UK, followed by Green Tea.

Black tea covers more health-conscious people, but the majority of the people like to add milk to their tea.

It adds up more flavour and taste to it.

English breakfast is often served with milk or with lemon and sugar. People may prefer black tea or green tea but tea with milk while having a perfect breakfast has its benefit.

Milk contains health-promoting compounds along with nutrients. Although the research regarding whether one should have tea with or without milk while having breakfast has been mixed in the end it all depends on your taste, doesn’t it?!

I mean green tea is good and all but who could resist tea with milk when you have a perfect English breakfast sitting on your table.

Having any other form of tea would be great for your health.

Having a black tea in an English breakfast is enriched with antioxidants that provide various health benefits meanwhile adding milk would lower the antioxidants.

The lower the fat milk consist, the greater the reduction of antioxidants it would cause.

So, more antioxidants or fewer antioxidants, people always appreciate a cup of tea, especially while having an English breakfast.

So how would you make a good English tea with milk? It is not that hard to make some tea but it is all about mixing just the right amount of ingredients.

How do you make English tea with milk?

Now, it depends on you that however, you would want to make a cup of tea. It always depends on the taste of the person.

You may make it as you please. However, if you have less idea regarding how to make a proper tea, be my guest with this guide and I shall help you make a perfect cup of English tea to make your morning routine from good to better!

The very first thing one shall do is boil some water for 2-3 minutes. You can boil as much as water depending on the amount of tea you wanna make.

Boiling water is the key that determines the taste and the aroma of delicate and refreshing tea.

The next thing you shall do is to carefully pour boiling water into a teapot.

Never let the boiled water rest in the kettle for more than 3 minutes as it can differentiate the taste of your tea.

According to some reports, more than 80% of tea is sold in teabags. There are various types of tea leaves and depending on the instructions mentioned on the packaging of tea bags, one should let the tea bag rest in the teapot with boiling water.

The time frame could range from thirty seconds to 2 minutes, as mentioned, it depends on the type of tea you chose.

After the relative time, one shall now remove the teabag from the kettle.

I would choose to use loose leaf tea instead of teabags as it provides more natural and flavoured tea.

As the tea is almost ready to serve, you shall pour the tea into a cup. The freshness and aroma of just made tea would make you feel fresh, let alone drinking it.

Now that the tea is ready, one shall add milk and sugar as per personal taste and preferences, some people may choose to add milk during the boiling process but adding milk at the last lets you smell the essence of leaf tea better.

How do you make English tea with milk?

At the last, the question comes, of how much milk one should add to their tea or what amount of milk is enough.

Well, the first thing always to be concerned about is the taste and preference of the individual.

Any amount of milk is fine in a cup of tea but some research states that many of the stains on teeth are due to drinking tea with milk.

Hence, you might want to keep the amount of milk added minimally.

Adding milk also reduces the number of antioxidants that are healthy for you and which is why many people drink black tea.

If you are conscious of all the healthy aspects of tea, you should keep away milk as many people do, however, if you are an individual who just wishes to enjoy some delicious tea, adding milk is not a big concern at all.

The overall conclusion comes down to only one thing, which is if you just want to have an English breakfast then you should try tea with milk sometimes but if you want to keep healthy aspects of tea alongside, a cup of tea without milk is never a bad choice.

Now that you know all this, you might want to go to make some tea right away!