These days we have been talking about everything related to the benefits and taking creatine.

And, also, we tell you some exceptions in which certain physiological profiles did not respond satisfactorily to taking this supplementation.

Taking into account that creatine is one of the most popular and consumed supplements, you soon asked me a question that always revolves around its consumption: does taking creatine cause possible hair loss? An explanatory post for you and all the others.

Taking into account that the vast majority of creatine consumers encompass the male sector, that we are the ones who mostly suffer from alopecia problems.

This is one of the main reasons that limit, to some extent, its consumption among those who suffer from problems of this type.

First of all, the truth is that the scientific evidence has little research on this subject.

And, consequently, a little demonstrable scientific basis exists to confirm or deny this matter one hundred percent, so we will stick to the analysed data of which we have.

Is creatine linked to hair loss?

One of the few scientific pieces of evidence that have analysed the possible relationship between creatine and alopecia.

The study called Three Weeks of Creatine Monohydrate Supplementation Affects Dihydrotestosterone to Testosterone Ratio in College-Aged Rugby Players, carried out in 2009, and verified by the official journal of the Canadian Academy of Sports Medicine, is one of the few studies that has focused, on this day, on shedding some light on the possible relationship between creatine consumption and the problem of hair loss.

This work focused on analysing the androgen concentration in a group of rugby players after three weeks of creatine supplementation, raising the possible hypothesis that after the consumption of creatine, a variation in the pre-existing ratio between the dihydrotestosterone concentration could occur (DHT, the most biologically active androgen) and testosterone (T).

Explained more simply, we tried to find out if the consumption of creatine caused the activation of an enzyme called 5-alpha-reductase responsible for producing the conversion of testosterone into dihydrotestosterone (DHT), one of the most frequent mechanisms studied by which androgenic alopecia appears.

Conclusions from a somewhat limited study:

To visualize results, the 20 volunteers who took part in the research were divided into two groups to begin the creatine loading phase during the first week.

In the second and third week of analysis, corresponding to the maintenance phase, 5g of creatine was ingested per day + 25g of glucose.

The results concluded the following variations:

DHT concentrations: after the loading phase, an increase in the dihydrotestosterone concentration was observed for the creatine consumer group of 56%, decreasing to a constant 40% after the maintenance phase.

T / DHT ratio: the ratio between both ratios did vary, rising to 36% after the first loading phase for the group administered with creatine.

This ratio between T / DHT is one of the most frequent study reasons in androgenic alopecia.

T level: the data that attracted the most attention in this work, and that shows the limitation or little clarity that we still have on this subject, is precise that the testosterone concentrations did not vary at any time during the investigation.

Previous studies have already analysed the short-term hormonal response with creatine supplementation in resistance training, concluding, in the same way, that there are no alterations in the hormonal patterns of growth, testosterone, or cortisol.

It is concluded that short-term creatine supplementation does not alter the responses of growth hormone, testosterone, and cortisol to a single session of heavy resistance training

Does hair grow back after creatine?

If creatine was the reason for your hair loss, the shed would have started around 2 months after you start taking the supplements.

Assume that creatine uses did cause your hair to thin and it should again start to increase back since you have stopped taking it.

The genetic and hereditary factors will be fundamental for the alopecic predisposition.

Despite the limited scientific information that we have, what could be made clear from this study is that creatine supplementation could be linked to the conversion of testosterone to DHT.

And an increase in the concentration of DHT, although it is not known for sure if it is a short-term or long-term mechanism to be directly related to a hair loss problem.

The genetic predisposing factor for alopecia would be, in any case, the key metabolic switch when triggering a hair loss problem due to creatine supplementation.

That is, this risk should only be applied to those men who show a significant genetic component, a hereditary tendency, or previous baldness problems. 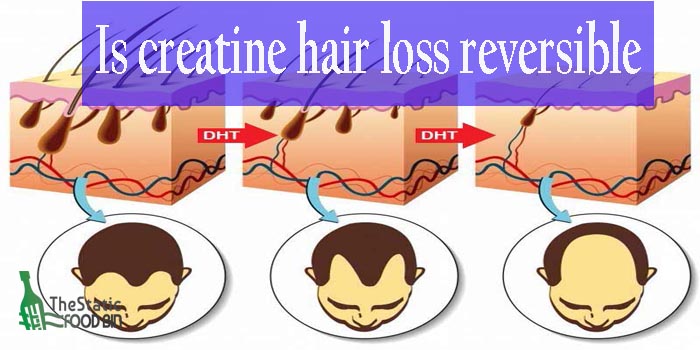 Creatine is a chemical often found in protein shakes and other gym supplements like glutamine.

Exogenous creatine intake is proven to help strengthen muscles while providing the user with an increase in muscle strength and recovery, making it an ideal supplement for, men and women, who train a high intensity with and without weights.

So, this all sounds good so far, but can creatine cause hair loss?

Well, this chemical doesn’t attack hair follicles or anything like that, but creatine itself helps to increase the amount of testosterone in the bloodstream especially in men.

This produces the hormone known as DHT which has been shown in many cases to accelerate baldness in men.

Women are less likely to suffer from elevated levels of DHT in their blood.

In summary, creatine increases the production of Testosterone and therefore DHT, which in large amounts can be equivalent to progressive hair loss.

Here also comes into play the genetic potential and possible allergies caused by taking Whey protein at the same time.

So, if your family has a history of male pattern baldness and you want to keep your hair as long as possible, it’s probably a good idea to stop taking creatine and see how your body responds to it.